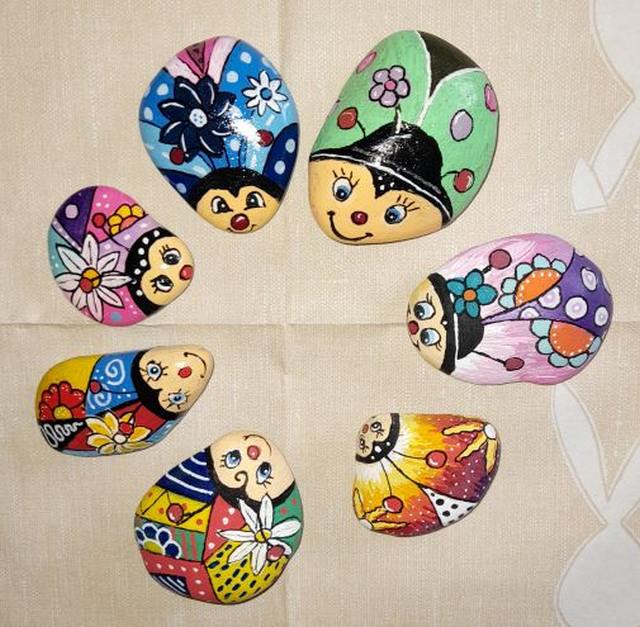 Hearts, smileys, fish or beetles are the easier motifs to paint, but painting detailed flowers, landscapes, fairy houses, portraits of animals or people or colorful patterns is more difficult.

But you’ll find also ideas about kindness rocks, where kind words or quotes are written in beautiful handwriting (called hand lettering) on rocks or Mandala stones which are mainly created through a technique called dot painting.

What To Paint On A Rock?

The imagination knows no limits. You don’t have to be Picasso or Van Gogh. Perhaps you have a particular preference for a motif, some like flowers, others frogs. (I know a lady who has so far turned/painted 1000 stones into funny frogs).

Maybe an event is just around the corner, e.g. Christmas, then you can paint the stone with Christmas motifs. Some stone groups suggest a different topic each week, e.g. “Modern Art”. And if that’s not enough, you can find countless ideas on Pinterest. 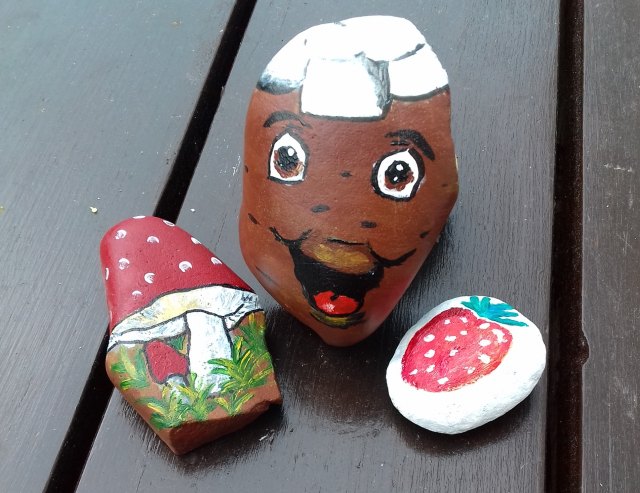 Personally, I have no preference for a particular motif or style. For a while, I painted funny colorful beetles that went down well everywhere, which earned me the nickname ‘Beetle Mama’. As cute as the bugs were, at some point I had enough and I wanted to try something different again. I also get inspiration from Pinterest, e.g. I wanted to paint a garden gnome. It didn’t take me long to find a good idea on Pinterest that I could paint on a rock.  I have also used vector graphics as templates for my painting on stone.

What to paint on rocks – easy ideas 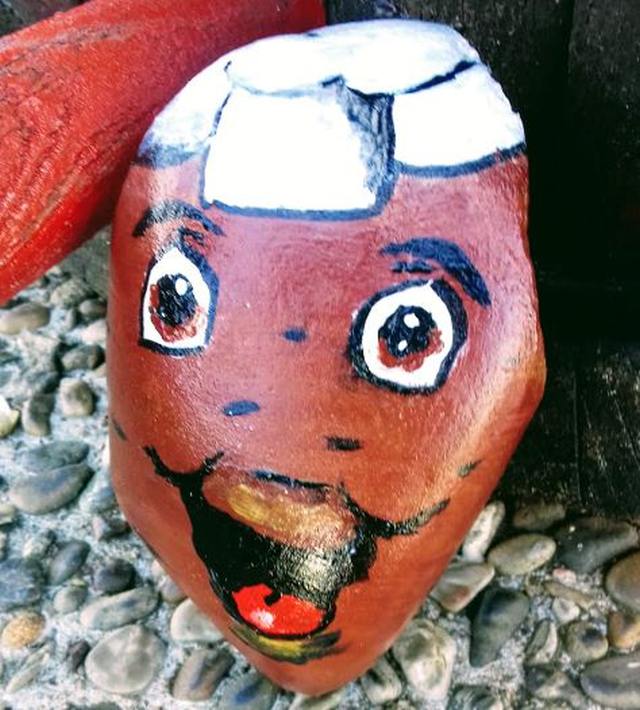 This photo of my ‘potato chef’ was one of my first creations on a rock with a size of 5×3 inches. The surface was smooth and the rock’s natural color was light brown. I found this rock perfect to try out something on it.

Since I was still testing waters, I used supplies I found at home.  I had some acrylic paint from my daughter’s artworks and common brushes. With a pencil, I marked the eyes, mouth, and chef hat. I mixed brown and ochre and painted the complete rock with the exception of hat, eyes, and mouth with this mixture. After this layer was dry I went on painting the hat eyes and mouth in it. Finally, after another drying period, I added the contours, with a brush.

As you can see, they are not too accurate or fine yet. Still, I was proud of myself, I wrote the Facebook Group on the back, got some acrylic varnish to seal the color. The next day I hid the rock and was curious to see whether it would be found. Actually after many days the ‘potato chef’ was found, posted and I was happy about it as a little kid. Now I was addicted, I drove to our local craft store and was given very good advice there about what supplies I needed as a beginning rock painter. I bought my first set of Posca Paint markers.