It all started on April 30, 2021 with the WhatsApp message: ‘Could you design 2 rocks for me with the motif: Om mani padme hum?’ The condition was that the lettering had to be in Sanskrit, the rest of the design was left to me.

I was very surprised to receive this message from my friend Petra, who has been an artist herself for many years. I also learned from her that she would like to set up the rocks in her practice (by the way, she is also a physiotherapist) together with a Buddha figure and candles. So the rocks should be a bit bigger. I thought of 6×3 inches. Since I am not very knowledgeable about Buddhism, I had to do a little research on this religion first.

Of course, I’ve heard of meditation and Om before, but what does this mantra ‘Om mani padme hum’ really mean? I was also concerned with other questions: ‘have certain colors a special meaning in Buddhism? Which symbols are characteristic of Buddhism?

According to Wikipedia, ‘Om mani padme hum’ is the oldest and most popular mantra in Tibetan Buddhism. Each syllable of the mantra has a meaning and translates accordingly: ‘Oh you jewel in the lotus flower’.

With this, I’ve already identified a symbol of Buddhism: the lotus flower. Buddhism regards the lotus flower as the birthplace of Buddha. The lotus flower stands for the purity of the heart, loyalty, creativity, and enlightenment.
I decided to paint a lotus flower on the rock. This mantra is often recited when meditating, hence a meditating person should also be seen. The idea for the first rock was born. It contained the lettering, a meditating figure, and a lotus flower.
I still needed the color selection. The international Buddhist flag has five colors: blue, red, yellow, white, and orange.
I remembered a rock I had recently poured in blue and white. I researched what meaning the colors blue and white symbolize in Buddhism and found the following result:
The color blue symbolizes universal compassion and white symbolizes the purity of the Dharma (teaching) and complete liberation beyond time and space. (Wiki)
I found this suitable and I started to paint my first ‘Yoga Rock’. The base coat was previously poured with acrylic paint and it was well dried. Now I took a black, thin Posca pencil and sketched the outlines of a female meditating person. The body is emphasized by different shades of blue and white highlights. The meditating woman sits in the lotus position on a stylized lotus flower.
Now came the hardest part for me: the lettering in Sanskrit. I practiced forever on paper until I finally dared to sketch it on the rock. I started with a very fine pencil and, as soon as I was satisfied with a line or a curve, painted over it with a fine white Posca pen. In order to better emphasize the writing, I again edged it with a very fine marker pen. However, I had to make a few corrections before I was happy with my result. For the second rock, I wanted to use a technique that I had heard of shortly before: dab the color on the rock with cling film to create a marbled background. For this I used colors again which correspond to the Buddhist flag:
Yellow – symbolizes the middle way
Red – symbolizes the blessings of practice (perfection, wisdom, virtue, happiness, and sublimity). Orange symbolizes the wisdom of the Buddha’s teaching. I really liked the result of this dabbed background. Looking for a suitable addition, I decided on the well-known symbol for the mantric syllable Om, which plays a major role in Buddhism. First practice on paper again, then the sketch on the rock. Colored it in with the color orange and outlined the contours in black. I didn’t like the result at all. The transitions seemed too hard to me. Following an idea, I outlined the black contours again with white. And voila: this time the result convinced me. I adapted the lettering ‘Om mani padme hum’ accordingly. Another message had arrived on Facebook:
“Dear Andrea,
I hereby officially invite you to the Art Box ‘Cube’ Award 20/21. You have been nominated because of the monthly exhibition.”

I didn’t know, what to say. I knew that some of my painted rocks were on display digitally, but I never expected anything.

I was also asked to present a collection of my painted rocks for this event. Oops, not many were left at home. I mostly give them away, soon after painting them. This meant sitting down and painting rocks. I realized it wasn’t that easy to paint on command. But I made it and I could display 18 rocks that evening. I was pretty nervous, but also excited. I never took part in an event like that, at least not as an active role player. I was greeted by my friend Petra and her partner both artists and co-founders of the Art Box. Petra had reserved a table for me, where I could display my stones and another creative project, the Bula Bears (soft toys) of mine. Pretty soon the room filled up and people crowded around the rocks. It was interesting to hear everyone named a different rock his favorite. I was asked about how I paint, what sort of paint I use, how I prepare the rocks, and what techniques I use. Of course, I could answer all the questions. I was among 12 artists who received a cube award. City Councilor Beate Funk held the speech and all of a sudden I was given this wonderful, handmade ‘cube’ award. To be honest, it felt good and I was proud of myself. 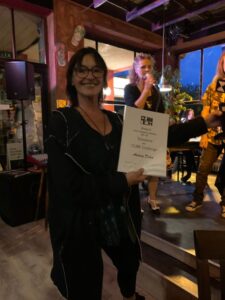 At the very end, I even sold 2 of my rocks, which I had never expected. Thank you, Petra, what a wonderful surprise.