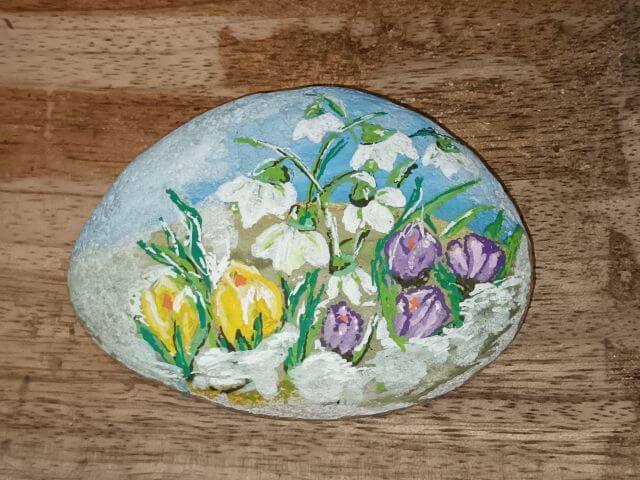 When I painted snowflakes on rocks it was 15 C (59F), it’s an odd winter this year. Funnily enough, it started snowing after the first snowflake rocks were found by rock seekers, who then said I summoned the snow. 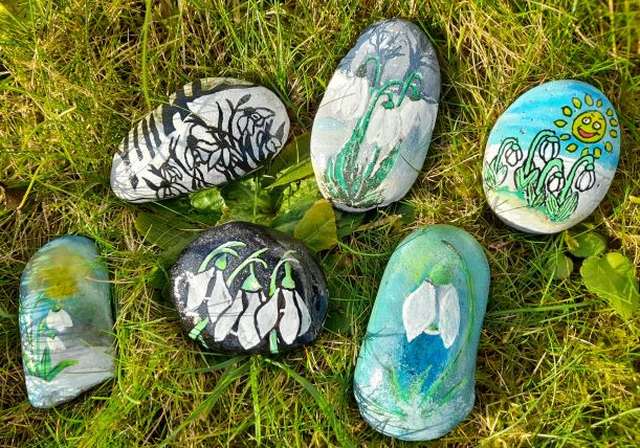 Snowdrops are always the first flowers to announce the approach of spring. The first tender sprouts of snowdrops appear in the garden as early as the end of January, some of them still covered with snow. In February and March, you can then enjoy the white, hanging flowers.

So there is no question for me that my first floral motif will be a snowdrop.
By chance, I found a linocut by Jan Willemsen with snowdrops as a motif on Pinterest. I tried to transfer this linocut onto a rock. It is the left rock in this photo. 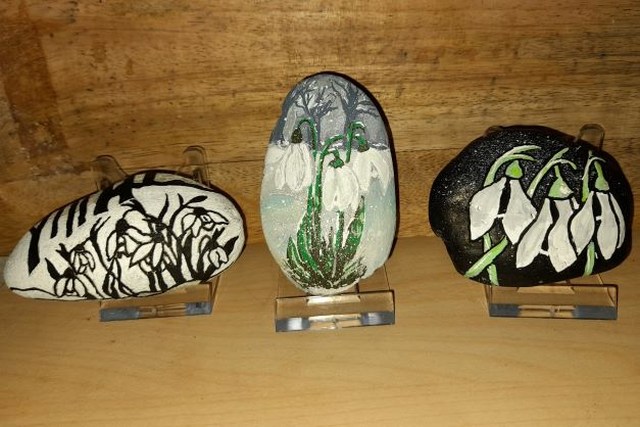 First I painted most of the rock here with white paint. Only a small part at the top of the stone retained its natural color. After the white paint dried, I painted the trees, the leaves of the snowdrops, and the outlines of the petals black.

I also found inspiration for my second stone on Pinterest: a watercolor painting by Sophie Hvidberg. It is the rock in the middle.

Shading the petals with Posca pens was a challenge. Again and again, I dabbed a little gray into the petals and then painted over it with the white pen until I liked the result.

The 3rd rock was pretty easy. I sketched the flowers first and colored them in, shading wasn’t a problem this time as I had practiced it on the previous rock. 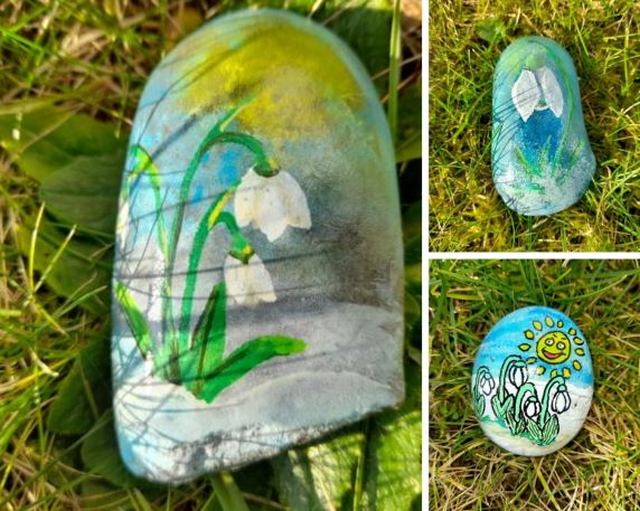 Although I like the first 3 snowdrop rocks, I wanted to make the next ones more colorful. With that in mind, the next three snowdrop Rocks were created.

As you may have noticed, I love to experiment with the backgrounds. Here, too, I first moistened the rocks with water using the plant sprayer so that the colors could flow into one another.

Here, too, I first moistened the rocks with water using the plant sprayer so that the colors could flow into one another.

For the first rock in this photo, I worked very wetly, while for the lower right rock I used very little water and instead smudged the colors with my fingers.

After the background had dried well, I painted on the snowdrops.

And now guess what happened, once those rocks were varnished, the sun came out and I was able to take those photos in the garden.

The crocus is also one of the first heralds of spring. The iris family delights us from February to April with its colorful, cup-shaped flowers. Purple, white and yellow is predominant. In the temperate zones of the northern hemisphere, crocuses are mainly found in parks and gardens, where they can form entire carpets of flowers. Snow and frost do not bother the crocus. There are over 200 species, some flowering in the fall. One of these varieties, Crocus sativus, is native to Iran and India and is also cultivated there because it produces the valuable spice saffron. 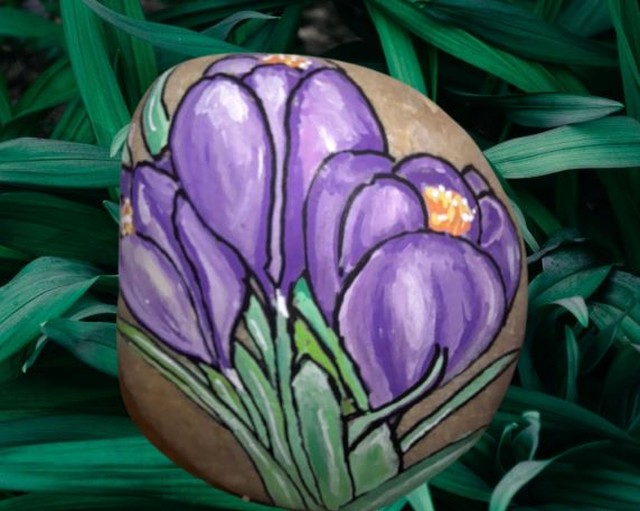 Of course, my fingers itched to draw these heralds of spring on rocks with my Posca pens, hide them, and bring an early spring greeting to its finder. On one of the rocks, I painted only purple crocuses. The stone I used was a beautiful, natural stone with a smooth surface. So I did not see the point to paint the background.

The second rock, where I painted the yellow crocuses, had a very rough surface. I had the surface created with my marbling technique already days before, not knowing, what I am going to use it for. I think it was a good decision to paint the yellow crocuses on it.

And last, but not least I wanted to paint multi-colored crocuses on a black background.

I had feedback from the finders of all the three rocks, they were all very happy about their found rocks. The early crocuses brightened up their day.