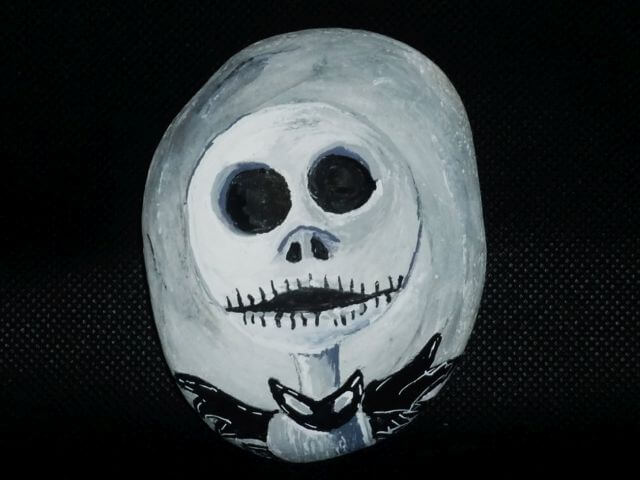 Every year again, in autumn when the leaves fall is the time for Halloween. Nowadays it’s a social spectacle where people compete to decorate their houses with colorful lights, ghosts, witches, and scary stuff. Halloween parties are celebrated and the kids wander through the streets, knocking on doors in the neighborhood and demanding trick or treat from folks opening the door.

Creepy tales and traditions about Halloween offer a  multitude of ideas for the rock painting: ghosts, witches, vampires, black cats, bats, ghosts, zombies, and of course Jack O’Lantern, a pumpkin that has been carved with a creepy face.  Typical Halloween colors are orange, black, white, yellow, gray, and red.

This is a considerable “material collection” to develop ideas for the painting of Halloween rocks. 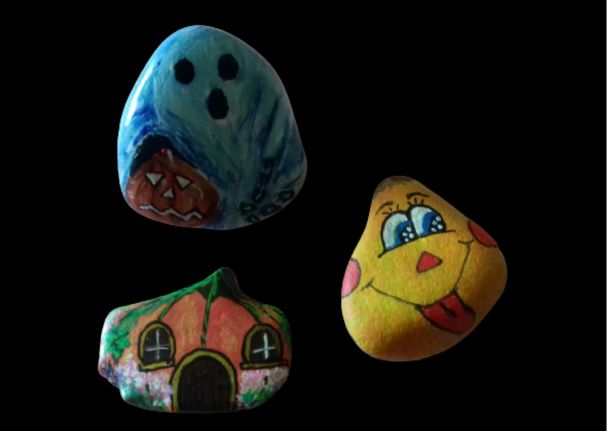 What is the origin of Halloween?

The custom of Halloween most likely dates back to the Celtic-Irish festival of Samhain. Samhain is celebrated from the night of October 31st to November 1st. Large bonfires were lit to celebrate the harvest and the beginning of the dark season. It was believed that during Samhain the gates to the spirit world were opened and that contact could be made between the dead and the living. Afraid of being kidnapped into the spirit world, people disguised themselves as monsters or animals. Animal sacrifices were made.

In the Middle Ages, the first Jack O’Lanterns (see legend below) were carved from turnips and place at doorsteps or windows. Instead of animal sacrifices, the spirits were offered small treats. The church tried to Christianize the festival of Samhain and declared November 1st to be All Saints Day.

Nevertheless, the pagan custom persisted and Samhain merged with Halloween (derived from ‘All Hallows eve’ = the eve before All Saints’ Day). 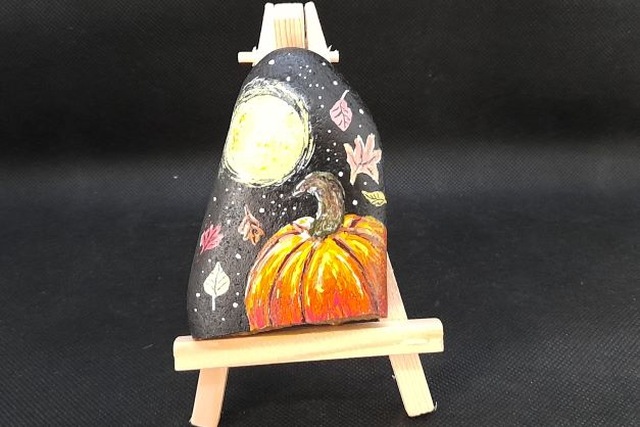 Can you imagine Halloween without a pumpkin? I guess it is the most important prop for this creepy night and that is, why I chose to paint it as the first Halloween rock.

I found a template for my pumpkin on Pinterest, including a tutorial on how to paint a pumpkin with acrylic paints and a brush. I wanted to try this method using my Posca pens. Working with acrylic paints and paintbrushes before, I’d say it is much easier to create good color gradients and transitions with these media than with Posca pens with which you usually use other techniques. But this was a challenge for me and I am rather pleased with the result. I found out, that the Poscas can also be mixed, although I find it easier here to start with the darker color and then apply the lighter shades from there.

The disadvantage: the tips change color quickly. The good news: They can be washed out. Soak under running water or overnight in water and then let dry. Replacement tips for the PC-5M, PC-3M and PC-1 M are available from Amazon. 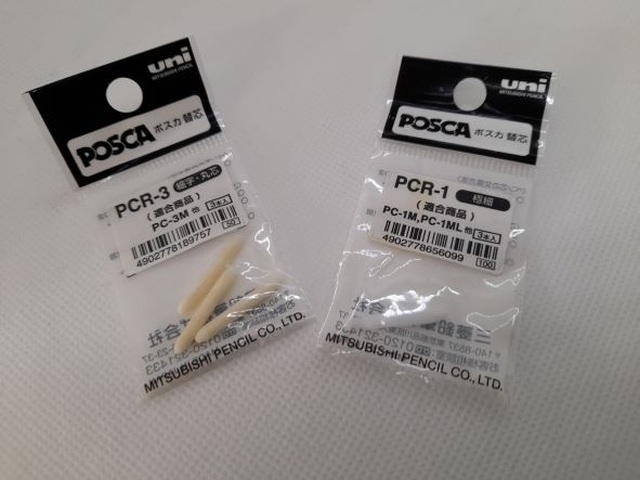 And another little hint: when the pens are empty I keep the tips and use them to paint on darker colors and the original tip of this pen stays nice and clean.

The tutorial starts by coloring the entire stone black and then suggests priming the moon and pumpkin with titanium white. If you were just painting with Poscas it would be easier here to paint the outlines of the pumpkin and moon rather than blacken them. Even if the black paint has dried well, you will need to paint it white several times until the black paint is completely covered. I have taken the color suggestions from the tutorial and think that the color gradients give a better result if you paint from dark to light.

Other Motifs for Halloween: 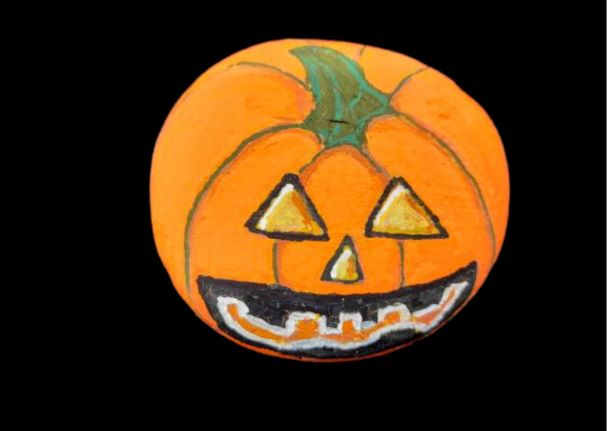 The custom of hollowing out pumpkins, carving out funny or spooky faces, and lighting them inside with candles originated in Ireland and came to be known as Jack O’Lantern.

The Legend of Jack O’Lantern

When a villain named ‘Stingy Jack’  died, God denied him access to heaven. Because Jack had tricked the devil several times while he was alive he was not welcome in hell either. Instead, the devil sent Jack off into the night with a piece of coal. Jack hollowed out the turnip and placed the burning coal inside roaming through the night ever since.

From this legend, people derived the belief that a burning lump of coal in a turnip had the power to keep evil spirits away, and the folks in Ireland and Scotland carved scary faces in turnips or beetroots, placing those in their windows.  With the migration in the 19th century, this custom was taken to the ‘New World’. There the native pumpkin was discovered and proofed to be the perfect Jack O’Lantern.

Accordingly, Jack O’Lantern is a must as a motif.

The Witch and her Partner, the Black Cat 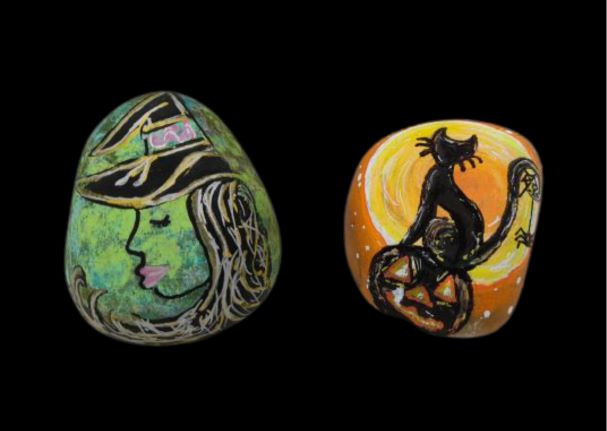 The witch is also an indispensable character on Halloween. She doesn’t have to be old and ugly, because a witch was originally a wise woman. The word witch comes from the word ‘Wicca’ which means ‘Wise One’.

I first primed my witch stone with the bubble wrap dab technique. To do this, paint the bubbles of the foil with different green Posca pens and dab the stone with them. Then the contours of the pretty witch were painted with black posca and highlights with gold and silver. The lips and the ribbon on the hat I painted in pink.

Every real witch has a black cat. For the background, I used orange, ochre, yellow, and white. After applying the colors ochre, yellow and white I wiped them with my fingers in a circular motion to soften the moon’s transitions. 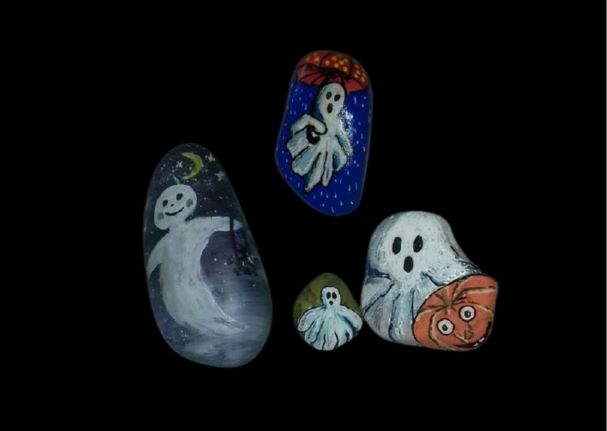 A variety of ghosts is a must for Halloween. They can be scary or funny. 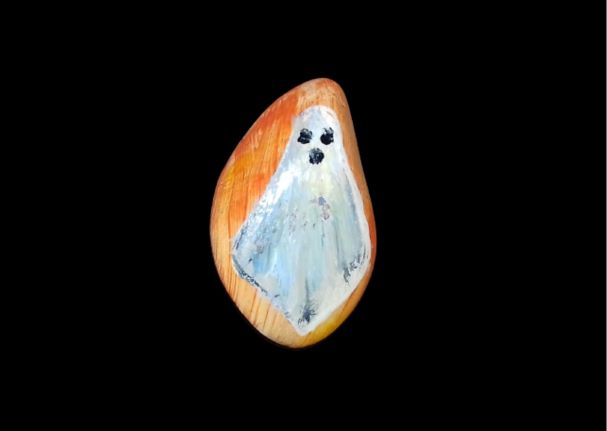 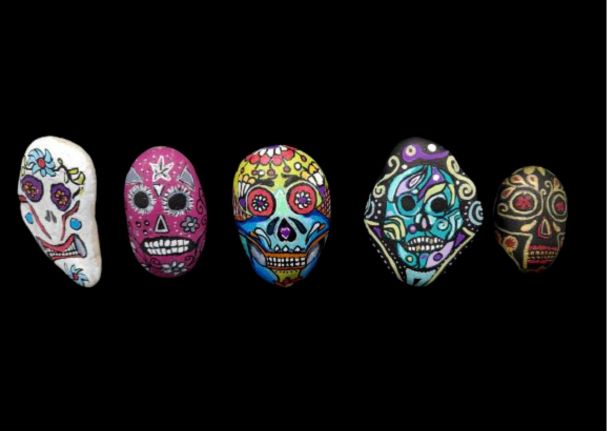 The Mexican celebrate ‘Día de los Muertos’ 1st or 2nd of November. While death is portrayed as creepy or frightening on Halloween, the day of the dead celebrates the life of loved ones who have died. Roads, houses, and cemeteries are decorated with colorful paper, and people paint colorful skulls on their faces. It was big fun to paint ‘sugar skulls’ on the Halloween rocks.

With a little imagination, you can find good motifs to paint on rocks throughout the year. Soon after Halloween, the Holiday season starts and it’s high time to start painting rocks for Christmas.