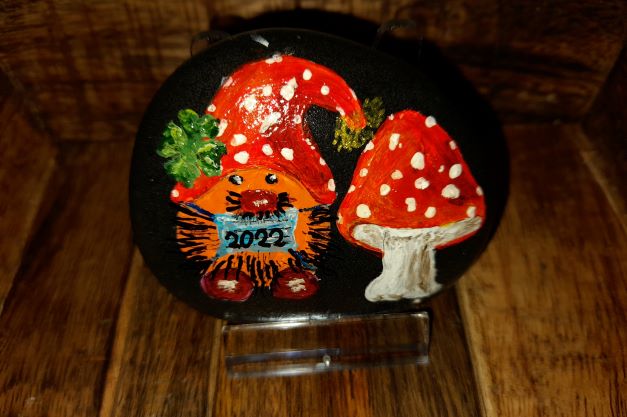 All the best, good luck, and health for the new year 2022 to all Stonies and you who are interested in reading my write-ups about rock painting art. Here are some new year rock painting ideas. Thank you very much for following my latest posts. 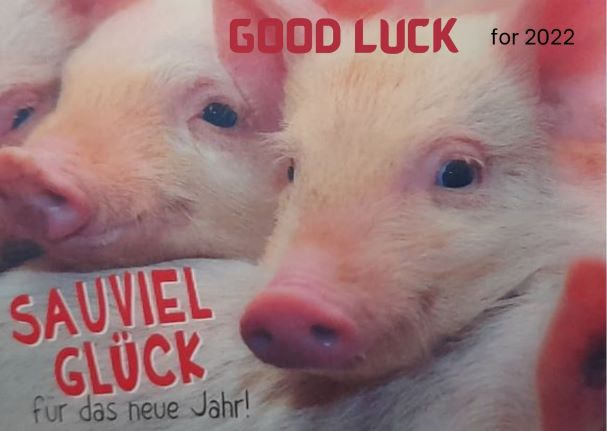 A new year means … new hope … new light … new thoughts and new paths. One takes good resolutions; one of mine is to show even more rocks here that inspire or encourage you to paint or perhaps give helpful tips.

Today I want to show you stones that I received for New Year’s Eve or stones that I found. I also painted some of them and gave them away. Maybe you will find some inspiration what you want to paint on a rock for the new year. While they are all so different, you can often find the same symbols and similar meanings.

Popular Symbols for New Year and Their Meaning

At the turn of the year, one wishes above all good luck for the coming year, which is often underlined with various lucky charms. Traditions for the New Year vary a lot depending o which place on earth you are living. I was lucky enough to get to know different cultures have seen learned about their New Years’ traditions. But in the end, they all have the same meaning: luck, health, and happiness. Currently, I am in Germany therefore I am looking at these traditions. I found some explanations for why these motifs are common New Year symbols. 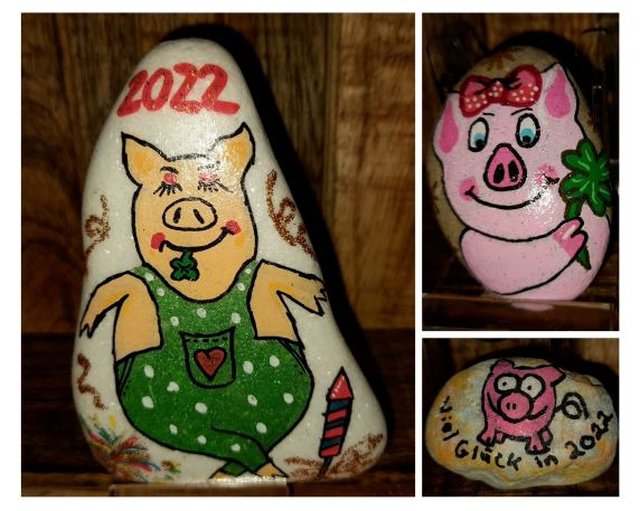 For New Year I was given a few lucky pigs painted on rocks, and I found more on my walks, see picture above. 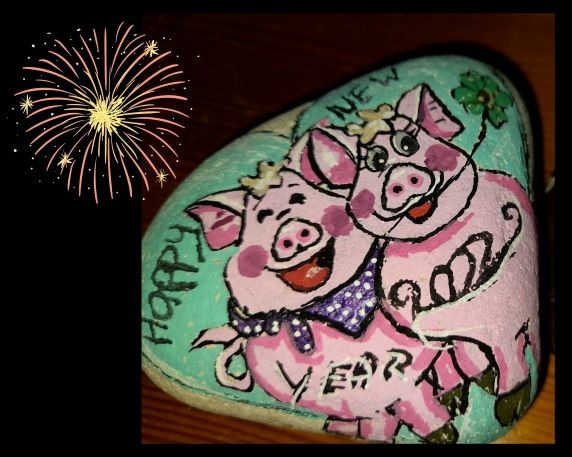 I painted the two funny party piglets, did hide the rock, and made the finder very happy. 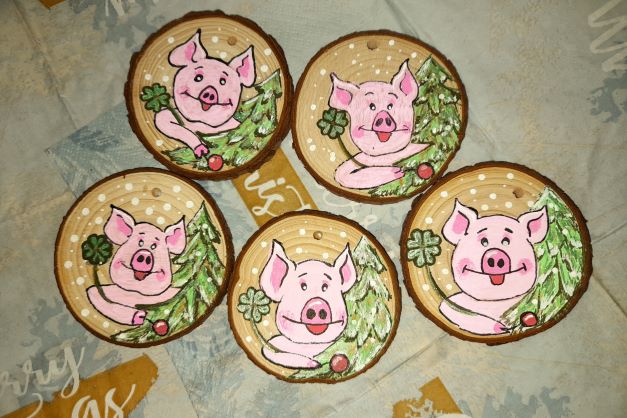 Already at Christmas I painted a whole bunch of lucky pigs on wooden discs and gave them away with best wishes for the new year. 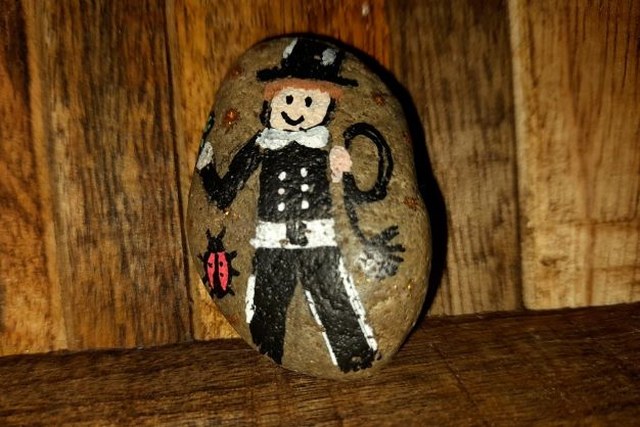 This cute little sweepstake on a rock was given to me for good luck on New Years’ day. 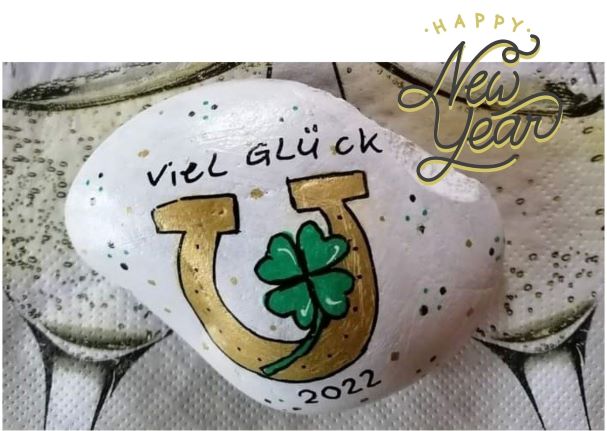 The horseshoe is also a lucky charm and motifs from it are often given away for the New Year to wish someone luck for the coming year.
It was considered lucky to find a horseshoe, as it was made from the valuable raw material iron. This raw material was said to have magical and healing powers, it is said to drive away evil spirits and cure diseases.
They used to be traditionally hung over the door of the entrance or stable on New Year’s Eve so that it pours luck over the owner (horseshoe is hung with the opening facing down) or to preserve happiness (horseshoe is hung with the opening facing up).

This beautiful horseshoe on a rock was posted on my Facebook group. Unfortunately, I wasn’t lucky enough to find this work of art. 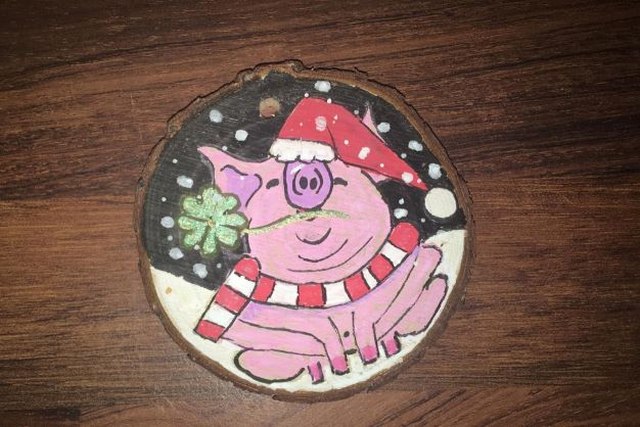 The four-leaf clover is a gene mutation and occurs only very rarely in nature, it takes a little luck to find it in our meadows. A real 4-leaf clover is said to bring luck to the finder. Above all, it is intended to protect travelers from misfortune and illness as long as they take the clover with them on their journey. This belief goes back to a legend that says that when Eve was expelled from Paradise, she took a four-leaf clover from there as a souvenir.

The commercially available lucky clover, which is given away at the turn of the year, is a plant endemic to Mexico and, in contrast to the real, rarely found 4-leaf clover, always has four leaves.
Paintings of the 4-leaf clover are always popular. I have integrated a 4-leaf clover with my lucky piglets. 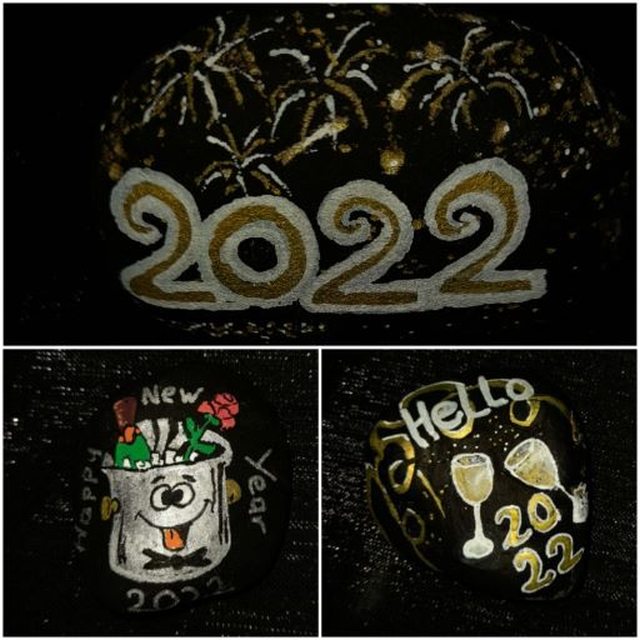 These are typical motifs that should not be missing for New Year, such as the fireworks or glass of champagne to toast the new year. These are some of the rocks I painted for New Year, I gave them away or hid them in the woods  or in the park